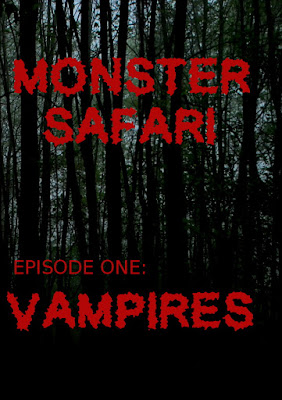 "Monster Safari" was the very first film that my family did. I'm going to embarrass them all by showing it to you.

I hadn't been born yet, but some of the other cats around here tell me that they shot it at home so Mommy wouldn't have been gone forever.


It's a parody on the nature shows that play on TV. "Action Jake" goes around looking for monsters and in this episode he's chasing vampires!

The cinematography isn't great and the editing really sucks, but it was Bad Daddy's first film and he says that they had a budget of about $14.

On the plus side, there are some funny moments that make people laugh and it does have the pacing of a nature show!

I have a hard time recognizing everyone because of all the makeup. And Bad Daddy looks so young! I like to think that I'm responsible for all the gray hair that he has now.

You can see it for free on YouTube:  https://youtu.be/SQkX21SGdW4