The World According to Hades 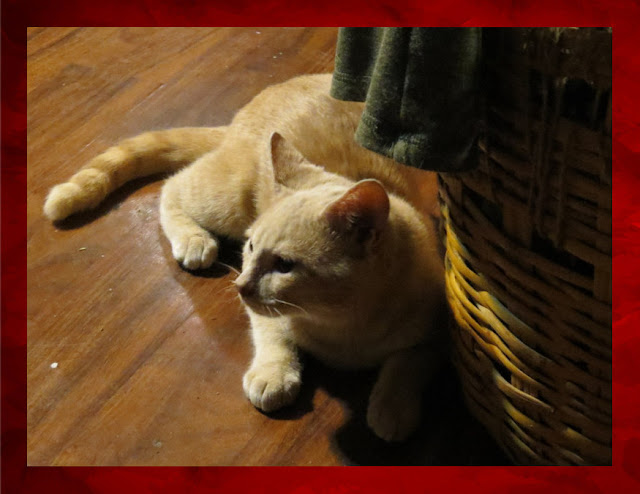 I know that I use a lot of terms that people who don't really know me have no idea what I am talking about.

One full day without Mommy is forever. The humans like to argue with me about that, but they'll never change my mind. If she's gone for a week doing her stupid film stuff, she's been gone for seven forevers.

I have one Mommy and two Daddys. I'm not sure how that happened but it's been going on for much longer than I've been around. (None of the other cats were around when it started either, so they are just as clueless as I am about it.)

I differentiate them with nicknames.  Good Daddy is the one who is usually good about keeping me content with treats and chin rubs, but not always. Sometimes he's Barely Tolerable Daddy.

Bad Daddy has a policy not to give any cats snacks. Not even special cats like me. He also likes to play tricks on me. For years I pretended not to like him whenever Mommy was around and would even go out of my way to make sure she saw that I was snubbing him. But then one day she caught me letting him give me a tummy rub, so the jig was up. But I still call him Bad Daddy.

I call my human grandmother "Gammy" because when I was only a few weeks old I couldn't say "Grandmother" or some variation of that. Gammy says that I ran up to her one morning and looked at her with an expression that seemed to say "Hi Gammy!". So that's my name for her.

My snake toys are called "Minions" collectively because I drag them all over the house and use them to show the humans what I want them to do. I think I'm getting pretty good at my communication skills.

I'm also the only cat in the house who likes to play with them, although sometimes my dumb brother Hobbes sits on them and the Bad Barky Dog tries to steal them.

The humans gave them each names so they could tell them apart. They call them things like "Blueberry Snake", "Squeaky Snake", "Tiger Snake", "Creamcicle Snake", "Mojito Snake", and "Halloween Snake". 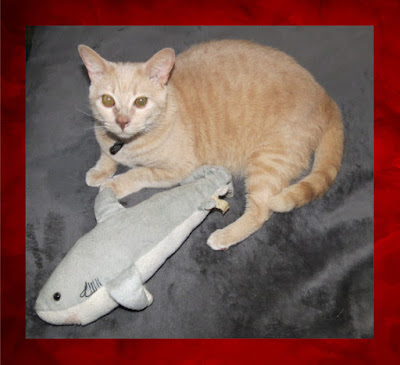 While I really prefer snakes, I got started playing with sharks as a kitten because my aunt Hatchet didn't really play with them anymore and gave them to me.

My very first shark is called "Cerberus", and I take a photo with him every year for Shark Week.  (My aunt Hatchet still does that too with her first shark toy.)

Whenever Mommy does laundry, I always make sure to lay down on the clean clothes while she folds them. I can't let the humans go running around without the regulation amount of cat hair on them. That would just be embarrassing.

Mommy and I often have late night snacks together and she always gives me little pieces of cheese because they are my favorite snack. I call them "Cheese Mousies" because sometimes I bat the around the room before eating them.  My favorites are  marbled cheese, farmer's cheese, and Muenster cheese.  I don't really like Swiss cheese, but neither does Mommy so that's not a problem.