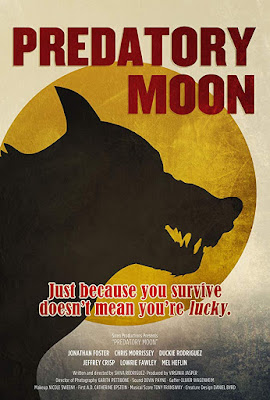 This was Mommy's first film as a director and she started working on it right before I was born in 2012.  Fortunately, she didn't film it until 2013 so it didn't take her away from me when I was really little.  But when she did go to shoot it she was gone for over THIRTY FOREVERS!

It's about a guy who everyone thinks got attacked by a bear, but an animal specialist thinks it was actually a werewolf that bit him. There's a whole town full of people who all have a lot of issues, so I think a werewolf might be not have been the worst thing in the area..

The story is okay but I got sleepy while watching it because of all the talking. It's not like most werewolf movies that pretty much offer up all-you-can-eat buffets for lycanthropes.

The actors were pretty good and they went through a lot! I like what they did to all the main characters (especially Bad Daddy, who really deserved it!)

The werewolves were kind of silly. Mommy could have saved a lot of time by calling them werecats and just unleashing me and my siblings on everyone!

My favorite part isn't in the movie. It's what a lot of people said about it after it was released. They told Mommy that she shouldn't make any more films.  I wish she would have listened to them because then she would have stayed home and paid attention to me all the time.

But Mommy is nothing if not stubborn, so she just kept making movies anyway.

You can see it on Amazon Prime here:
https://www.amazon.com/gp/video/detail/0FFLEZEJM6GAOTRNGRW1Q2XMW3