Movie: Green From The Grave 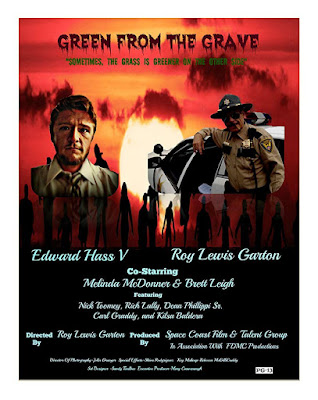 
"Green From the Grave" is a short film that Mommy and Bad Daddy did the special effects and stunts for. I'm a little mad at this film because they were gone for one or two forevers.

The story is about a laboratory that accidentally makes a hoard of zombies with a green goo.  This was a little disappointing to me because I thought the green would be fresh catnip, which always makes some of the cats in my house act like freaks.

It kind of reminds me of some of the older zombie flicks that always play on TV in October. There's a lot more dialog than action and the characters cover all the expected troupes, like the bad-ass with a lot of guns and the cigar-chomping sheriff who is just really mad about the situation.

It has some scary scenes in it, but it also has some funny moments too. Some of the lines are kind of cheesy, but I think that was intentional. They reminded me of how Bad Daddy thinks he's being funny when he's picking on me.

I jumped a little from all the loud gun bangs. You'd think humans would know better than make lots of loud noises when zombies are around, but they never do. That's why cats are going to survive the living dead apocalypse.

But I really liked watching the sheriff with his big hat. I was mad when he took it off until I found out why. It looks like Mommy had some fun with him.


You can see it for free on YouTube  https://youtu.be/Be0B9ZnW7-Q