Movie: One Night of Fear 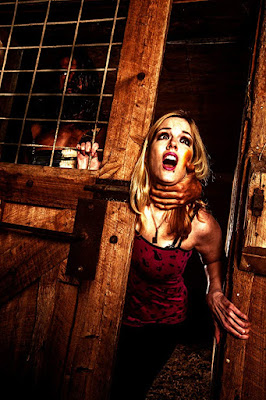 This is a movie that Mommy and Bad Daddy did the special effects for.

I'm really mad at this movie because Mommy was gone for over 6 forevers while they worked on it. I know that she could have taken me with her to the hotel she was staying at, but she said that she was only there for a few hours a day and I'd get bored being by myself.

It's very loosely based on a true story, or at least a rumor about why there are so many disappearances in Ocala Forest in Florida. A few people go on vacation in the woods and are stalked by a killer with some serious grand-daddy issues.

This is a pretty standard slasher story that does have some interesting kills. The actors are pretty good and there are even some funny moments in it.  Sometimes I got a little sleepy with the dialogue scenes though, but then it picks up again with action and some really brutal flashback scenes.

I was surprised to see Bad Daddy and Mean Aunt Lowrie were on the screen! I like what they did to them. I have been wanting to do stuff like that to them for years.

They also did really bad things to my nice friend Mel, but Mommy says Mel goes through stuff like that all the time in movies.

There was also a big guy who yelled a lot that really scared me. I liked the taller guy better because he just got his business done without hurting my ears.


You can see the movie on Amazon:
https://www.amazon.com/One-Night-Fear-Jessica-…/…/B01MDU9P3G