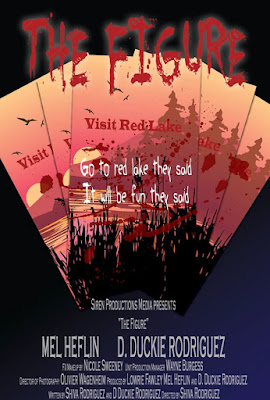 This is the second film that my Mommy directed. Bad Daddy and Good Daddy helped out too along with a bunch of other people that I know personally. (Does that make me a groupie?)

I wasn't really mad about this film because they shot it at my house so I could look out the window and see what was going on. And everyone came in and said hello to me whenever they had to use the bathroom.

It's a horror-comedy story about a group of kids that knowingly go camping in the woods where a masked killer is supposed to live.

It's really bloody and the action scenes are good, but then I almost fell asleep because there was too much dialogue.  The acting was pretty good though. You can't even tell that the one girl really doesn't speak French in real life!

Best of all, my nice friend Mel stars in it and she doesn't get chopped up into cat food like she has in other movies I've seen her in.

Mommy and Bad Daddy are particularly proud of a murder scene they did involving pan pipes, which I have to admit was pretty cool.

You can see it for free on YouTube.  https://youtu.be/_h2_NlMdGvk