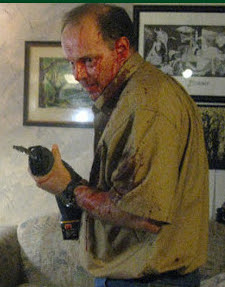 This short film was directed by Good Daddy! It was made before I was born, but if I had been around I wouldn't have minded because it was shot in my house.

It's about a guy who has been hiding a food addiction from his wife so she calls in his sponsor to hold an intervention. It doesn't end well.

I can tell this was made really fast because there are lots of little mistakes in in.  You can even see Gus peeking through the cat door in the background sometimes.

But it's very bloody too, and the ending is both funny and really creepy.

Good Daddy says it was done for a quick contest. Mommy wrote the script and did the special effects for him. And Gammy is even in it!

You can watch it for free on Youtube!  https://youtu.be/Lqz9yuol7R0