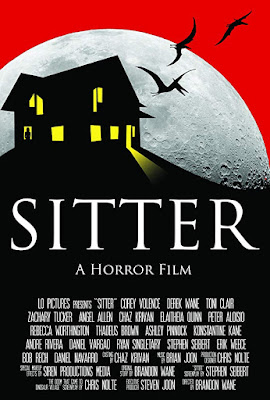 This movie only took Mommy and Bad Daddy away for one forever, so I can't be too mad about that. They did some of the special effects for this movie.

I think this is more of a twisted dark comedy than a horror movie. It's two films in one and it is very strange but really funny too.

The idea is that a babysitter is going through some pretty creepy experiences, especially after her boyfriend shows up. And on the TV in the house she's sitting at, there's a B-movie playing.  So the film is done in two different styles and it's neat to watch!

The acting was really good, especially one actor who was playing roles in both sides of the movie!  There wasn't anything I didn't like about this movie because the bad things I would normally mention were done intentionally.

I also really liked all the dinosaurs in it. But I still like snakes and sharks better.

You can see it for free on Vimeo.  https://vimeo.com/lopictures/sitter