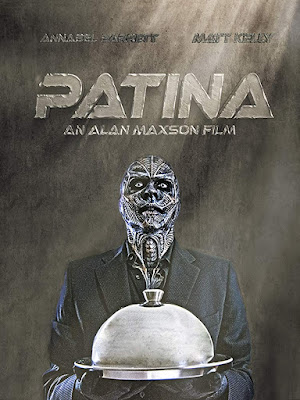 I just started giving my reviews on films that Mommy didn't have anything to do with and she suggested that I start out with this short film by a new friend she met at one of those stupid film stuff events that she keeps going away forever for.

"Patina" is about a guy who brings home a really smart robot to help his girlfriend out around the house. His girlfriend isn't happy about this because she thinks his new toy is creepy.

I have to agree with the girl. The robot is really creepy and he should have just gotten her a stuffed animal and a subscription to a maid service.

But the dumb guy leaves his girlfriend alone with the creepy robot and things go downhill from there.  He wasn't even nice enough to spread some catnip around to help calm her down before going to work. That would have solved a lot of problems.

When I watched "Patina" I really liked to robot's voice and how he moved.  I'm used to watching unsettling movies so that didn't bother me, but I think the tension in the story would have some of the humans I know climbing the walls.

I didn't like all the yelling though. Why do humans always yell when they get mad?  I mean, if she didn't like the robot she could have just told it to go outside. I say that to the Bad Barky Dog who annoys me all the time.

But overall it is a really good short movie. I don't think Patina is a real thing since most movies aren't, but I would get one for Mommy if I could. I think it would do a better job at following orders than that stupid Roomba that keeps getting stuck under the kitchen cabinets.  I wonder if Patina would clean litter boxes too?

You can watch Patina on Amazon Prime here:
https://www.amazon.com/dp/B07YL8BGVJ