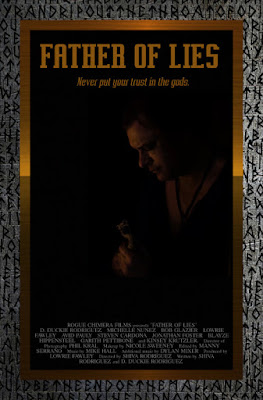 This is a movie that Mommy directed and I really hate it because she was gone for SIX FOREVERS and she took both Good Daddy and Bad Daddy with her while they were filming it. She even took Good Aunt Sandy and Mean Aunt Lowrie too!

It’s about Norse mythology and I know for a fact that Asgard had some cats running around in it, so I am mad that I didn’t get to be in it too. Then the Bad  Barky Dog told me that he was upset too because they didn’t cast him as a wolf either.


When I got to view the movie, I was happy to see that it didn’t look like any of them were having a good time. In fact, they were doing really bad things to each other! That’s why they need to put a golden beige cat in their movies. They wouldn’t fight so much because they’d be too busy petting me.

It's about how Loki got separated from his children (kinda how like this movie separated me from Mommy!)  Only the other gods got mad at Loki and tied him up. Luckily for him, some other people found him and let him loose!

Some of the people talked weird and they dressed funny, but Bad Daddy tells me that the gods have their own style. I personally think they need a fashion consultant because fur is not a good thing for people to wear.


You can see the movie for free on Amazon Prime:
https://www.amazon.com/dp/B07ZG8PGR3